Based on the succes of the movie RIZE!, directed by fashion photographer David LaChapelle, pANdADDY promoted the European tour of the Krumpkings (LA) in 2006.

The tour in the Netherlands was part of the reknowned July Dance Festival, and included two legendary performances at the Paradiso in Amsterdam, and a open-air workshop for more than 100 local dancers at the Vondelpark Summertheatre. 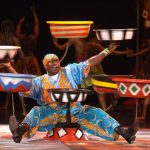